The Buckland Mutual Telephone Company was organized in 1903 by a group of people in the Buckland community. Original stockholders purchased their stock at $35 per share during the years of 1903-1904.

The Company was capitalized for $7000 in 1903. J. B. Edman did a lot of the work involved in selling the stock and organizing the company. When the Company was first organized, the stockholders received a free telephone. All of the other patrons were charged a fee of $1.00 per month.

A magneto system was installed with eight to ten families on each line. The phones were wooden boxes with a crank on the side. In order to use the telephone, you needed to call central so the operator could plug in the call on the switchboard. This switch was used until 1958.

Ed McDonald acted as manager and night central for many years. Ed was handicapped, but he faithfully slept by the switchboard so telephones could be used during the night time hours if they were needed.

Early in the history of the Buckland Telephone Company, a very bad storm did a lot of damage to the lines and poles. The company was a mutual company, so the stockholders were assessed for the cost of the repair. This caused bad feelings about the company at the time.

The original book of minutes of the Company was

destroyed when Ed Mc Donald’s building burned. Ed, being the manager, kept the books in his office. He had a shoe repair business in the front part of the building and made brooms in the back. That building stood where the present telephone office is located. The original telephone system was located upstairs in the house next to Ed’s building.

D. 0. Richardson, served as secretary of the company in the early thirties. In 1948, Dana Richardson was elected to the board replacing his father. Earl Hager was president, Glen Bonifield was treasurer, and Clarence Dingledine was secretary. Frank Wheeler was also a board member. Robert Fry was acting manager and Jim Kurt z was line man. He pulled a trailer behind his car to carry his supplies and tools.

In 1952 Robert Fry resigned to spend more time on his radio business. Doris Brookhart was hired as business manager. In 1953 Jim Kurtz retired at age 75 and Russell Moon was hired to replace him.

At the annual meeting in 1955 board members were given a free telephone for serving on the board of directors.

Fred Bowsher was asked to audit the books of the telephone company in 1957. Prior to this time, three stockholders were asked to perform the task.

At about this time it was apparent the Company was going to need a new building and a different switch in order to meet growing needs. Pres. Hager and Dana Richarson, acting as secretary, met with the People’s Bank. Adrian McMurray suggested we establish a value on the franchise of the Company of $25,000. Then the bank would lend the Company the funds for our improvements.

The board secured Emmet Lusk as the attorney to do the legal work to incorporate the value of the franchise in the records of the Company. This was added as an asset in 1956. The Company was authorized to borrow $12,000 for a used switch and a new office building. This building was built in 1957.

In 1958 Carl Mack was elected to the board replacing Clarence Dingledine. The Company purchased a used Kellog Switch from Doylestown, Ohio in 1958. Russ Moon and his dad took a truck to Doylestown and dismantled the switch and hauled it back to Buckland.

In 1963 the by-laws were revised so that all of the board of directors would not be elected the same year. Two board members were to be elected for three years(Hager and Richardson), two for two years (Wheeler and Mack), and one for one year (Bonifield).

Doris Brookhart resigned because of ill health in 1967 and Kay Lishness was hired as the office manager. Gerald Brookhart replaced Carl Mack as the new board member in 1968. During this year, the net worth of the Company reacted a new high, $100,000. 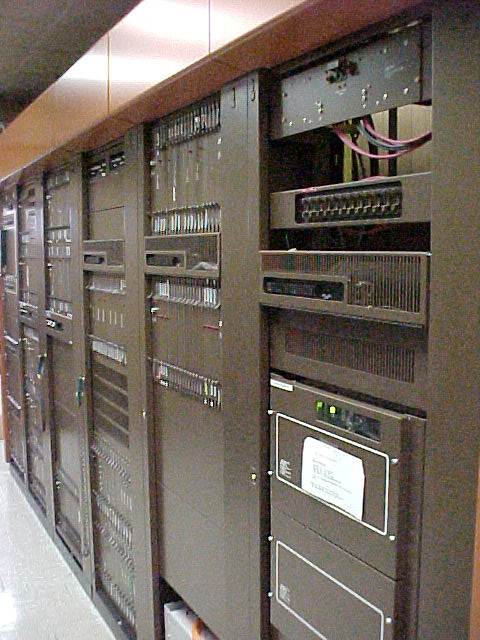 A change from a four digit switch to a seven digit service occured in 1971. This eliminated the need for telephone operators for the switchboard. Many hours of dedicated service were given by the switchboard operators.

Odos Craig was elected in 1971 to tthe board of directors replacing Frank Wheeler.

The stock was split in 1972. This made a total of four shares for each original share of stock making a total of 330 shares at $100 per share. The by-laws were changed so a total of twelve shares could be owned.

In 1972 an advertisement stating that Rural Electric Association was making telephone loans was noted and a letter seeking information was undertaken. A Mr. Colburn, an agent for R.E.A. met with the board of directors of the Telephone Company and explained the R.E.A. program as it pertained to Rural Telephone Companies. On June 25, 1972 the board made an application for a loan.

Fred Bowsher retired as auditor in 1972 and Mr. Ward was secured to replace him.

A lawsuit was filed against the Buckland Telephone Company by a Detroit Finance Company in 1975. Mr. Elsass, of Elsass Construction in Shelby County, had a job bid to bury cable for the Company. The board had paid for the cable but Mr. Elsass failed to inform the Detroit Finance Company of this fact in his business arrangements with them. The board lost the local hearing. Then the board took the case to the Court of Appeals. This time the Buckland Telephone Company won. Then the Detroit Finance Co. took the case to the State Supreme Court, but they were the losers again. Even though the Company didn’t have to pay twice for the cable, it was very costly for lawyer fees, etc.

Glen Bonifield, faithful board member, passed away in 1977 and was replaced by Ray Sidey. That year the R.E.A. requested board members not receive free telephones.

The board voted to remove the word Mutual from the name of the Company in 1978. Board compensation was raised from $3 to $20 since the board members would no long receive free telephones. A lot was purchased from Carrie Ziegenbusch for a building needed to store equipment. A Morton building was built.

In 1979 the board canceled the Nationwide Retirement Insurance and purchased insurance from National Telephone Coop. Insurance for employees and directors. Earl Hager retired after serving fifty years on the board of directors, and he was replaced by his son, Wilbur Hager. In 1984 Frank Wheeler, a twenty year board member died. Both Earl and Frank had served well.

911 service was made available August 7, 1985 by the County Commissioners through the County Sheriff’s office. The board began discussing what needed to be done to provide the service to our patrons.

A motion was made and passed to go to a digital switch in 1986. That was the year Ray Sidey was elected secretary of the Company. In 1987 the company purchased the digital switch from Northern Telecom Company.

In 1988 the customers asked for extended service to Wapakoneta. This request passed and the work was to be completed by October, 1991. Dan Lambert started working for the Company.

911 service began operation in 1990. Russ Moon retired after many years of fine service and was replaced by Doug Place as general manager. Credit cards for the Buckland Telephone became available.

In 1993 the patrons requested extended service to Lima. This also passed and the work wascompleted in 1994.

In 2015 the Nortel DMS-10 was taken out of commission and replaced with a Taqua T7000 Phone Switch which greatly expanded the company’s phone service capabilities.

In an ever changing atmosphere in the world of telecommunications, the Buckland Telephone Co. began positioning itself to retain leadership in communications such as instituting a master plan for dealing with new technologies such as fiber optic, the Internet, Cable Television, and open competition in the telephone services area. The company intends to remain in the forefront in providing its customers with the best products and services available.